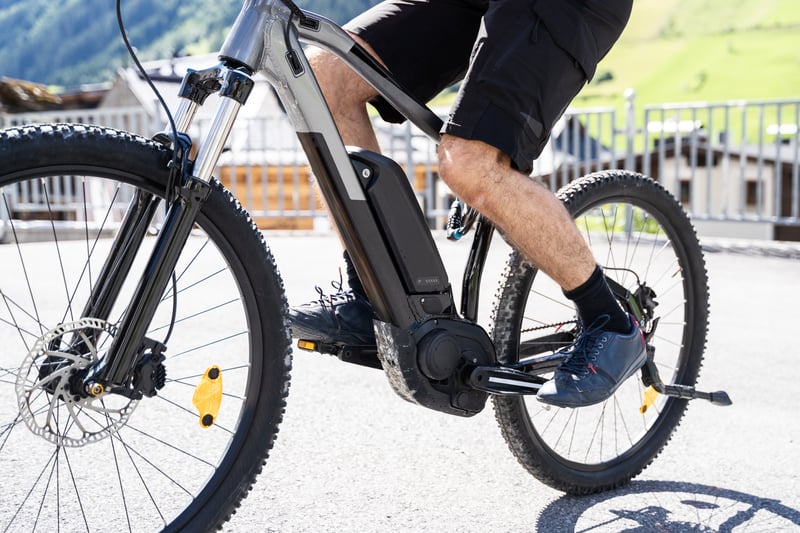 Most of us have some idea of what an electric bicycle (E-bike) is.  But not many people have a beyond-basic knowledge of what e-bikes really are and how exactly they function.

Although the electric motor, battery, and controller make up the bulk of an e-bike’s components, a few additional parts, such as sensors, throttles, and displays, are also built-in to help convey signals for when and how much force a rider needs when pedaling.

Yet, generally, e-bikes are more complicated than a few sentences can describe.  Don’t worry though, I’ve designed this post to methodically simplify the understanding of what electric bicycles really are and how they generate the additional mechanical boost.

That being said, we need to begin with reviewing each part separately; here is why….

The Parts of an Electric Bicycle System Explained

Knowing what electric bicycles really are and how they work requires a bit more familiarity with the components and accessories that make up the e-bike system.

The simplest way to better understand e-bikes is to study each electric component separately and then put them together as if you’re finishing a puzzle.

So without further ado, let’s go over each of the five main components that make up the electric bicycle system.

You can think of the e-bike’s motor as its heart; it intakes electricity and pumps out mechanical force.

The motor is usually located in one of three different places.

The ones placed near the cranksets (pedal area) are known as mid-drive motors.

Here’s what a mid-drive motor looks like as a part of the crankset.

Another type of electric motor is known as hub-motors.  They’re incorporated into the hub of either front or rear wheels.

The bulky round object you see in this photo is what a rear hub motor looks like.

Essentially, the motor’s job is to transform energy.  It receives electricity from the battery, processes it through its internal wiring, and converts it to mechanical movement.

Not to get too geeky, but it’s worth knowing that the mechanical movement referred to occurs when the circular-shaped magnets inside of the motor get energized by electricity and start spinning.

Take a look at this picture for a better visual reference of what those circular-shaped magnets inside the motor look like.

The spinning of these circular-shaped magnets is what generates the torque (Torque is rotational force), which leads to mechanical movement.

Needless to say, the motor discussion can get much more complicated than just a few sentences.

But, for now, all you need to take away is this:  Electricity goes into the e-bike’s motor, energizes the motor’s circular-shaped magnets, the magnets start spinning, and that spinning produces rotational force.

Here is what the BATTERY does

The batteries have come a long way.  These days, e-bike manufacturers mostly use lithium-ion batteries.  They are rechargeable, much lighter than their previous models, and are more potent and reliable.

For a more natural appearance, the batteries are often designed to be placed within the frame tubing of the e-bike.

Here is an example of an e-bike with the battery placed in its downtube for a more natural look.

Sometimes, you’ll see the battery packs placed on the rear carrier rack or mounted on different sections of the bike.  Usually, these are aftermarket add-ons but work the same exact way.

If you open an e-bike’s battery pack, you will see a series of cylindrical battery cells, like the typical AA tube-shaped batteries we use for remote controls.

Here is what the inside of an e-bike’s battery pack will look like.

These battery cells are connected to each other and are regulated by a battery management system located within the pack.

Like the motor discussion, the battery science can be stretched to complicated details as well, but for now, let’s just focus on learning the basics.

So, know this about the battery: Many tube-shaped rechargeable lithium-ion batteries are taped to each other and placed in a pack.  They generate the initial energy in the form of electricity, which then transmits to the motor.

Here is what the CONTROLLER does

An e-bike’s controller is pretty much its communicating device like the air traffic control tower at airports.

It is directly connected to all other electronic parts of the e-bike.  It receives and transmits signals and adjusts the volume of electricity flow to the motor in response to the amount of energy needed.

The controller is a circuit board placed in an aluminum box, which can be mounted separately or placed somewhere inside other components.

You may not readily see the controller, but here is a picture of what controllers look like.

Essentially, the controller is the module that regulates the e-bike system’s varying performance output.

You’re riding an e-bike with a twist throttle.  You either decide to go a little faster or to get more assistance from the motor because the road gets hilly.  You twist the throttle (like motorcyclists); that twist sends a signal to the controller.

In response to your twist’s intensity, the controller draws a matching amount of electricity from the battery and transmits it to the motor.  As a result, the motor increases its performance by outputting more mechanical force.

Speaking of signals and communication, e-bikes’ sensors and throttles are parts that have communicative functions and characteristics.

Let’s start with the basic throttle, which is the equivalent of a gas pedal for traditional motorcycles.

Mounted on the handlebars, e-bike throttles can be a twist-kind or a thumb pressing type.

Here is what each type of throttle looks like on the handlebar.

Throttles allow riders to pull out more power from the motor by simply twisting the throttle, similar to what motorcyclists do when applying the gas to accelerate.

Sensors, on the other hand, are smart detecting devices that signal the electric bicycle’s pedal-assist systems when to engage and how much mechanical support to generate.

The most common types of sensors are cadence and torque sensors. Although all sensors’ purpose is to detect and measure movement, each operates slightly differently.

The cadence sensors, installed near the pedal area, activate the motor as soon as they detect pedaling.  Of course, the controller is the determining device on how much energy to generate in response to the sensors’ input.

In contrast, the torque sensors measure how forcefully a rider is pedaling, signaling the controller to generate the required assistance level.

LCD displays are almost always mounted, faced up, on the handlebar.

You’ll find various displays in the market, but this is what a typical display looks like.

Obviously, the purposes of showing the speed, battery capacity and output amount, and trip odometer are self-explanatory.

However, the LCD displays also have a feature that a rider can use to regulate the pedal-assist number.

The pedal assist number refers to the manual adjustment of power output by the motor to predetermined limits.

The display’s motor power adjustment (the buttons with plus and minus signs) can give a range of 0 to 6.  Six being the most power the motor can generate and zero being the shut-off of all electrical functions.

Again, all you need to remember about the display is that it works as a computer, just like your regular car’s cockpit.

These parts pretty much summarize the five critical components that convert a regular bicycle into an e-bike.

Don’t get me wrong though, electric bicycles have many more pieces, parts, and special equipment that regular bikes may not have or need. But, generally speaking, the components I walked you through are the masterpieces of electric bicycles.

How Do Electric Bicycles Work?

When someone asks how an electric bicycle works, they’re really asking how an e-bike generates and applies the power to propel the bike forward.

The answer comes in two parts: (1) An e-bike’s motor generates mechanical force using electricity from the battery. (2) the motor then applies the mechanical force to the spinnable parts of the bike’s crankset or the wheel hubs.

All in all, an e-bike’s entire system is designed to generate extra torque.  I know that torque can have a sophisticated meaning, but let’s keep it simple; in our discussion, you can think of torque as a spinning force.

Ultimately, the additional torque applies itself as pedaling assistance through a small chainring that connects to a middle bar of the pedaling equipment.

Although the movements generated by the additional torque are a bit different for the two types of motors (Mid-drive and Hub motor), the process of mechanical force generation and application is the same.

So, Let’s Do Some Recapping

In addition to all the parts of conventional bicycles, e-bikes are equipped with five electric parts that operate collectively as one complete system.

As I mentioned, the best way to learn the e-bike system is to individually examine each electric component and then assemble them together like completing a puzzle.

So, if we were to assemble the e-bike components like a puzzle and display them in picture form this would be a good visual representation of where each of the five main components is located.

Forecast industry experts believe e-bike sales will grow from 3.7 million to 17 million per year by 2030.

With the rise of electric bicycles’ popularity worldwide and the constant search for cleaner forms of transportation, I’m pretty confident that if you are not an e-bike owner today, sooner or later, you will have one parked in your garage.

For that reason, I believe it would be beneficial for all to start familiarizing themselves with more than just the basics of this phenomenon.

Hope this post helped you dig a little deeper into the subject.

Please help us by sharing this post on your social media and with your friends.