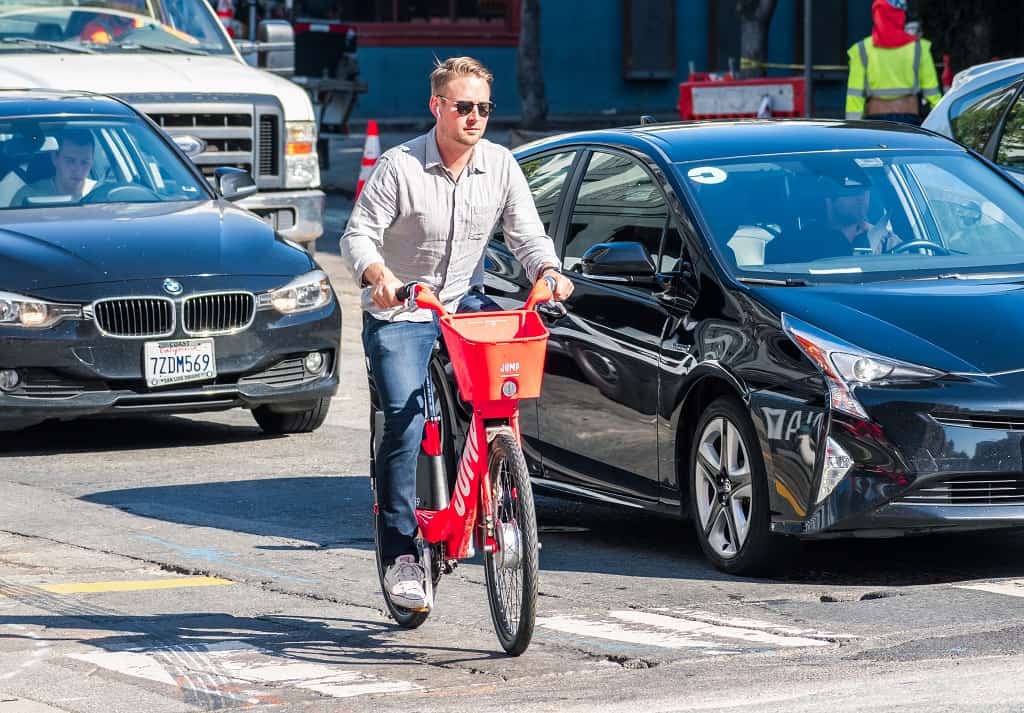 Electric bikes are one of the personal assets that offer several benefits and services simultaneously. Economic incentives, health benefits, help with managing certain medical conditions, traffic/parking management, and emission reduction. But most don’t realize that these advantages are two-fold.

You might have heard of the obvious incentives before.  But don’t take them for granted. Each incentive branches out far beyond its apparent good, making electric bikes the most purposeful gadgets ever!

Using an e-bike as a mode of transportation lowers ALL costs associated with driving and not just a few bucks on gas.

While I’m sure you’ll be glad to see yourself spending less at the pump, lowering mileage on your can will also help you save money by enrolling in a pay-per-mile insurance plan.

Of course, maintenance, repairs, and tires are the obvious costs associated with operating a car.  But, think about all other unexpected expenses that are not-so-obvious—incidentals such as dents, scratches, windshield damages, traffic and parking tickets, etc.

Just because these things don’t occur to one car owner often doesn’t mean they don’t happen to millions of car owners daily.

Whether you’re riding your e-bike recreationally, or running local errands, or you’re e-bike IS your car, the average difference in the annual cost of operating a car versus an electric bike is about $3,000.

You certainly can do other things with ANY portion of that $3,000 you end up saving while you’re strengthening your cardiovascular health.

Are you keeping an eye out for potential investment opportunities? You may want to pay closer attention to the movements in the electric bike industry. Forecast industry experts project that by 2030, the sales of e-bikes will increase from 3.7 million to 17 million per year.

Here is an article published by CMC Markets on the booming e-bike market, giving you a quick rundown of all the players in the e-bike industry.

So, who would be in a better position to make investment decisions than a person who owns an electric bike?

3. Making Money With You E-Bike

You’ve heard of the “gig economy,” right? Well, more and more flexible and diverse opportunities rise by day in the gig world that incorporates the use of e-bike.

Recently, there’s been a sharp spike in the use of electric bikes by couriers, grocery and food delivery, and special event workers. In fact, Zoomo, an electric bike rental company operating in four major urban cities worldwide, is offering weekly e-bike rental programs for couriers and everyday commuters.

This means electric bikes are not just for recreation anymore. They’re being used to make business happen!

4. Saving Space Can Save You Money

Saving space may not be relatable to big homeowners with lots of storage room.  But think about those who choose alternative housing formats.

The trend of urban living is pushing people towards smaller spaces, especially in high-cost cities.

The need for additional space for a full-sized vehicle can be a deal-breaker for smaller housing. But a mini or foldable electric bike can be a game-changer in these cases as it easily folds up and can be stored in tight spaces.

Daily commute methods are not the same for all living areas.  In some cases, people use multiple modes of transportation for routine day-to-day commutes.

For instance, it’s not uncommon for an urban resident to catch a taxi to a metro station and then hop on a bus or train to reach the final destination.

This is where folding electric bikes can replace one or even two of the modes of transportation. They can be a connecting ride, eliminating the need for taxis or buses while purposefully made to be easily portable.

Let’s face it; exercise is not easy.  Many people are not in suitable shape to run or even to jog slowly.  Gyms can get boring, and walking may not be exciting enough for most people.  And if you’re not exercising regularly, conventional biking won’t be easy either.

So what can get you excited about exercise, be suitable for a beginner, and help you in many other ways?!?! An electric bike.

6. E-Bikes Are More Effective for Exercising

If you want to commit to an exercise routine, find the fun in it. The truth is that e-bikes are fun and likable because of their recreational nature.

In addition to the consistent workouts, e-bikes help with longer exercise sessions.  The keyword here is “longer”.  This means that with the support of motor assistance, regardless of your fitness level, it will be comfortable to ride longer.

In other words, it will be comfortable to EXERCISE more, despite your fitness shape.

Electric bikes are an excellent idea for people who need exercise but do not have the stamina or strength for conventional biking or other workouts because of chronic health or medical issues.

Exercise is necessary for people with existing health conditions like heart disease, diabetes, musculoskeletal problems, or even those recovering from surgeries or long-term health conditions.

But, these health conditions make it hard for them to exercise and stay motivated adequately.  However, an electric bike with a combination of pedal-assist and throttle can be a perfect exercising machine.

The comfort of motorized assistance will help with extended exercising time; thus, empowering and motivating those who need the additional push.

Here is a study published by the American College of Sports Medicine attesting that e-bikes may provide an opportunity to promote cycling among older adults, particularly those with mobility issues.

The Traffic and Parking Dilemma

E-bikes may not be the remedy to major traffic jams in highly populated areas. Still, they can significantly reduce traffic and parking congestion in some areas within a city, which undoubtedly will help with the traffic flow beyond those areas.

That is NOT a “World Peace” kind of pipe dream.  E-bikes CAN reduce traffic jams today!

How often have you been stuck in a local traffic jam only to realize a school zone causes the congestion?

The point here is not to say that parents should take their kids to school using an e-bike.  But, why couldn’t community college and university students commute to their campuses using an electric bike or an electric scooter?

On average, colleges have about 2,000 parking spaces on site.  Throughout the entire day, these spaces are used by at least two vehicles.

Do you not think that thousands of vehicles constantly entering and exiting a small area within a community causes backing up beyond its immediate location?

9. Parking Will Be Easier and Taffic Will Flow

The root cause of the parking problem is clear; the issue is the ratio of open space available over the size and number of vehicles that visit any given lot on a day.

So, do you see any infrastructural changes in your town to accommodate more vehicles in parking lots in the near future???

Clearly, commuters’ increased usage of electric bikes can remedy the parking shortage much faster than any other alternative.

The moral of the story is that if the average driver spends 17 hours a year looking for parking, this will inevitably result in traffic hotspots, thus backfiring on traffic flow in the nearby area.

It’s also worth mentioning that the hunt for parking space is estimated to cost $345 per driver annually in wasted time and fuel.

The Eco-Friendly Part of the Discussion

Alright, let’s be honest.  The average person in the world does not wake up in the morning thinking how they can help reduce global or even local pollution.  We hear about environmental disasters caused by pollution all the time. Still, most of us are not consciously taking measures to reduce our footprint in the pile-up of toxic waste.

The good news is that by choosing an electric bike as one of our modes of transportation, we automatically take a share in pollution clean-up.

10. E-Bike Are the Most Recycleable Rides

Electric bikes are commonly described as one of the cleanest energy modes of transportation.  They almost produce zero emissions during utilization.

One may argue that e-bikes still require an energy source like electricity (associated with emission) to charge the battery. But even for recharging, solar power ports can be used, which reduce the emission of pollutants such as carbon dioxide, nitrogen dioxide, and other particulate matter.

But did you know that electric bikes do more good for the environment by their higher degree of recyclability?

Unlike other modes of transport, electric bikes are highly recyclable.

-The battery. When the battery replacement time comes (and that happens once every several years), owners acquire a new one and turn the used one in for recycling.

-The frame. Most of the bicycle body is recycled and used to manufacture a new bike.

-The tires. Similar to other vehicle tires, e-bikes’ tires are recycled into other forms of usable rubber.

-The motor. Some companies have been refurbishing e-bike motors to be used on second-hand e-bikes.

The entire concept is engineered to use renewable energy as fuel, and similar to other green products, e-bikes will only get greener and greener with time!

Electric bikes will only get more popular as time progresses.  You may be seeing e-bikes all over your town already.  The bottom line is that no other gadget or tool ever created plays as many roles as e-bikes do all at once.

Electric bikes are the only personal belongings that save money, help improve and maintain health, help with more effortless mobility, and reduce carbon footprint simultaneously.

Spend some time getting to know e-bikes because sooner or later, you will have one parked in your garage.